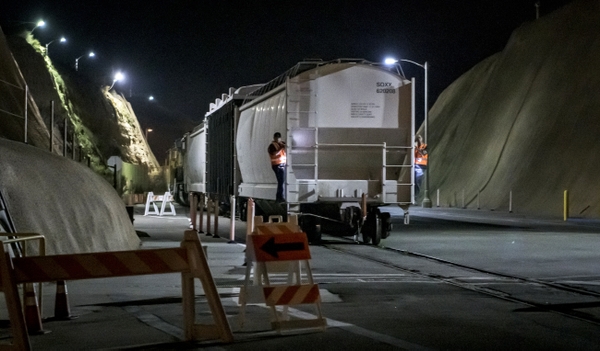 The crew arriving at SONGS to pick-up the first railcar with asbestos-containing material bound for Clive, Utah.

One of the initial projects undertaken in February for the deconstruction of the plant was upgrading the rail spur that runs from SONGS north, connecting with the mainline. Crews replaced railroad ties and tracks, helping facilitate the shipment of the Unit 1 reactor pressure vessel to Clive, Utah, in May.

The rail spur actually stretches toward the middle of the site, though those sections haven’t been used for many years. More rail upgrades were completed after the initial work, and the first railcar was prepared for shipment last week. It left SONGS Wednesday night, also bound for Clive and the Energy Solutions disposal facility there.

During dismantlement, the plan is to use these tracks as much as possible.

“Railcars are much more efficient than trucks, because we can get a lot more material at a ratio of about 6 to 1,” said Vince Bilovsky, director deputy decommissioning officer for SONGS. “We're going to minimize the truck shipments as much as possible, and when we do make them, we'll do our best to make sure they're off peak hours, so we don't negatively impact (local) traffic.”

The first shipment took asbestos-containing material from the site, roughly 82,000 lbs. worth. The railcars are covered and meet all regulatory requirements for safe transportation. 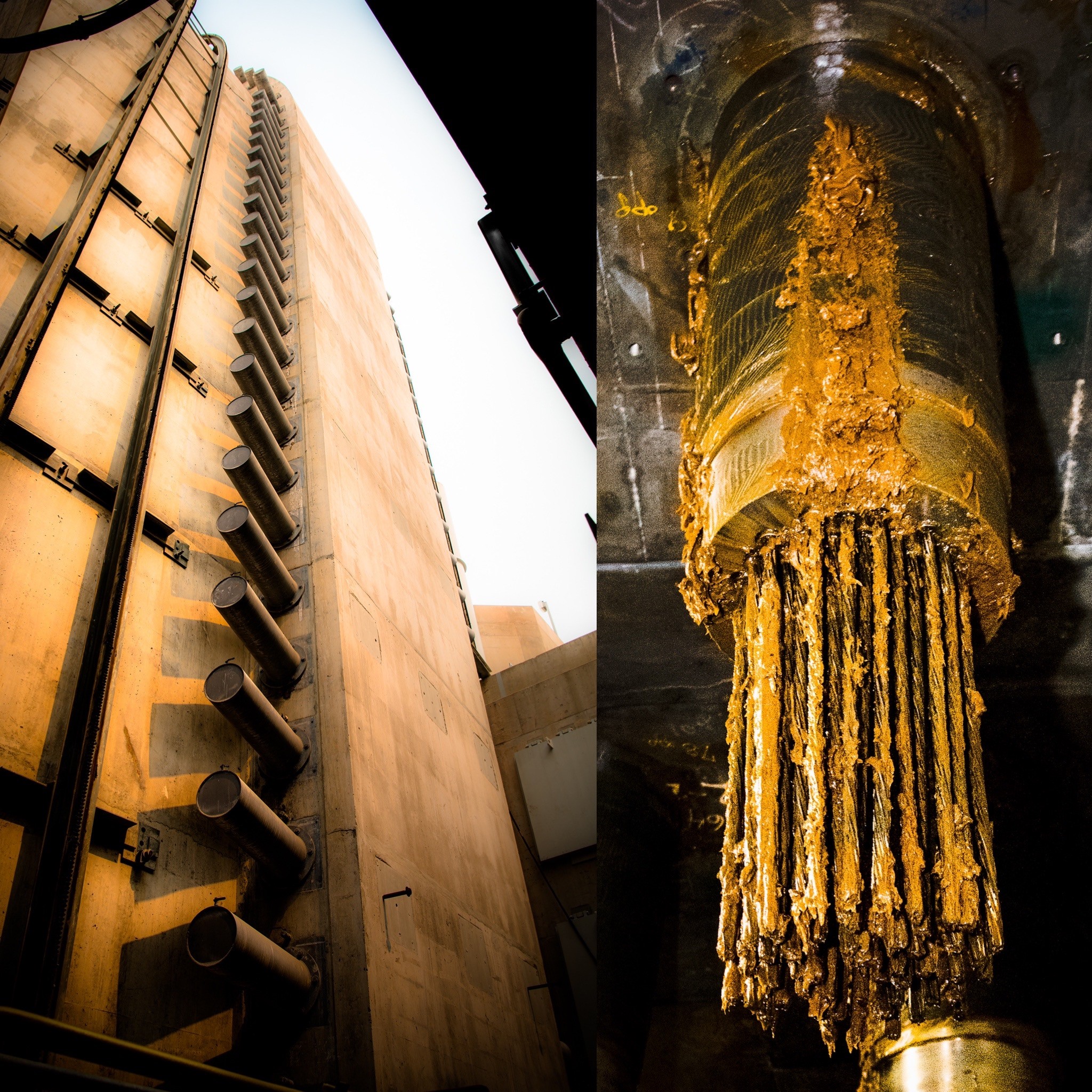 The tendon "cans" are visible in the image on the left. At right, with the can removed, the tendon cables are visible.

As part of dismantlement, crews are removing cable tendons that crisscross the SONGS containment domes. Though not visible, each dome contains 90 vertical tendons and 114 horizontal tendons.

Each tendon is made of 55 half-inch diameter cable strands and each strand is made from seven high strength wires. Overall, there’s approximately 5,700 miles of tendon strands in each containment dome.

These tendons were under approximately 1.5 million pounds of force, tension that helped further strengthen the four-foot thick walls of the containment buildings.

The verticals are in an inverted U-shape, running all the way up one side of the dome, and back down to below grade on the opposite side—varying in length from 390’ to 460’. The horizontal tendon "cans" are visible on the outside of the containment dome.

The scope of work for this project involves de-tensioning, or loosening, the tendons and removal of some. Before that can happen, each tendon must be “de-greased,” with each tendon sheath containing 50-100 gallons of grease. Once the can is taken off, the grease is collected in drums and will be safely removed from the site.

To ensure the work is done safely, SCE has an experienced team providing oversight. 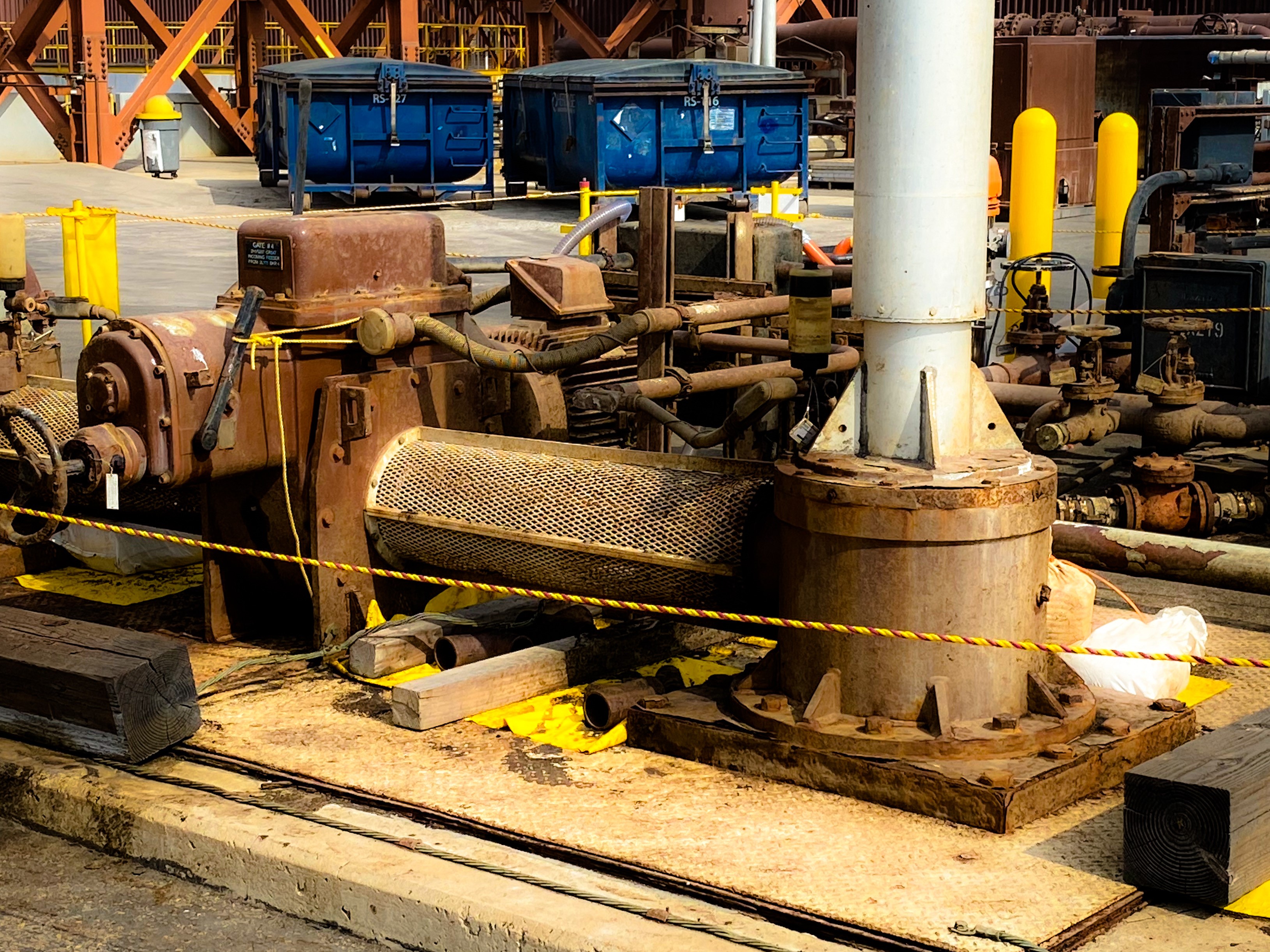 Traces of material were found in this area of the plant. The material will be cleaned up as part of the decontamination of the site.

A key aspect of the deconstruction of SONGS is the decontamination of the site to below Nuclear Regulatory Commission levels. Radiological safety will be a central focus throughout the careful dismantlement process. Radiological health specialists will help ensure the radiological material stays precisely where it is supposed to be until it is packaged and removed from the site.

Recently, a trace of radioactive material was detected near a grate above the outfall structure within the plant boundary. The outfall structure is where liquid discharges, such as batch releases and other wastewater releases, are made. Batch releases were paused until Oct. 1 in order to take baseline sampling measurements of the area. The material in this instance was found near the motor that operates the gate. (When we say material, we are essentially talking about specks of dirt. Our radiation monitoring equipment is highly sensitive.)

“We had an appropriate response, so the plans were put in place and we took samples from three points,” said Vincent Barone, SCE engineering manager. “When we dismantle the plant, they’ll clean that area as part of the decontamination process." Barone says other nuclear plants have experienced similar situations with outfall structures.

Site characterization work continues to identify radiation levels throughout the plant to ensure the safe dismantlement and decontamination of structures.