Focus Shifts to Domes with All Spent Fuel in Dry Storage

On Aug. 7, the last of 73 spent nuclear fuel canisters was safely placed into the Holtec dry storage facility at SONGS, closing out a campaign that begin in January 2018, and clearing the way for dismantling the above-grade structures.

The location for the highest profile dismantlement project at SONGS is not hard to miss: the two iconic containment domes that are visible from Interstate 5. These domes, robust structures made of thick concrete reinforced with steel, including a steel liner plate, housed not only the nuclear reactors for Units 2 and 3, they also contained the steam generators and other equipment and components used to make power when the plant was operating. Before the domes can come down, all of the equipment and material inside will first need to be removed. 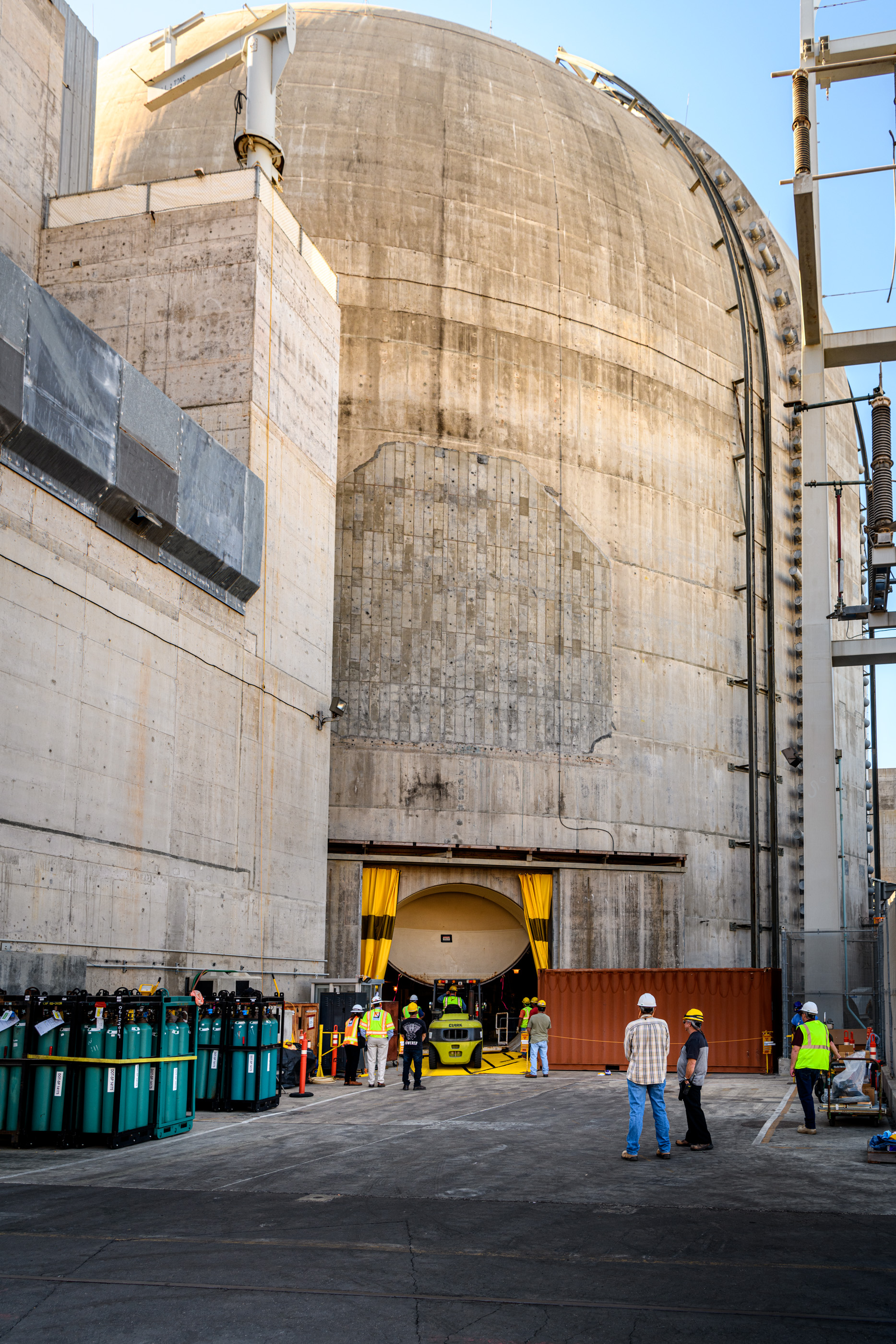 The equipment entry hatch in the Unit 2 containment dome.

Gaining Access
One of the initial projects undertaken during the SONGS dismantlement was removing asbestos-containing material inside the domes. The work was completed with no Occupational Safety and Health Administration recordable injuries and with very good results, as final testing for asbestos came in well below EPA safety limits.

With this hazardous material removed, work is moving forward enlarging the access openings in these buildings that will accommodate equipment, such as cranes, to be moved in and staged for future projects. The wider opening will also allow for material to be removed from the domes as it’s packaged for out of state disposal. Unlike the Unit 1 reactor pressure vessel which was recently shipped to Utah in one piece, the larger size of units 2 and 3, along with advancements in technology, will bring a different approach to how these components are handled. This time, the reactor pressure vessels will be segmented using sophisticated tools and packaged for off-site shipment. The reactor vessel internal components will also be segmented for eventual storage in stainless steel canisters on site or shipment off-site.

“These are substantial structures and with detailed planning and oversight we will execute this work safely,” said Vince Bilovsky, SCE Director, Deputy Decommissioning Officer. “Our decommissioning contractor is experienced in projects such as this and has successfully performed the work at other nuclear sites around the country.”

Additional work on the horizon will be to remove the cables, or tendons, that are embedded in the structures. These cables were tensioned after installation to provide additional strength to the concrete domes.

The initial work on the domes will begin this year and stretch into 2026 or 2027, at which point both structures will have been removed.

Lessons Learned
Throughout the dismantlement process there will be opportunities for improvement in our processes and procedures. As we learned during the recently completed fuel transfer operations, pausing to adjust how we do things can yield benefits. After an issue during the lowering of canister #29, we stopped fuel transfers and adjusted our program. The remaining 44 canisters were safely stored without a similar issue occurring.

During dismantlement, we are using the lessons learned during fuel transfers to help guide how we approach our oversight responsibilities and interact with our contractors.

Recently during preparation work in one of the containment domes, a rigging incident occurred when a component called an Excore Detector was being removed from its housing. The detector was part of a system used to monitor reactor power level when the plant was operating. A rigging cable failed as it was lifting the 150 lbs. component, leaving it in a partially withdrawn position. The crew immediately re-rigged the detector and safely removed it from its housing and placed it on the floor shortly thereafter. Following evaluation of this event, we adjusted our process for this activity going forward, including a review of the job hazard analysis associated with the project and the rigging instructions. We improved our team communications, using headsets instead of radios, which we implemented prior to the removal of the remaining nine Excore Detectors, all of which were completed safely. 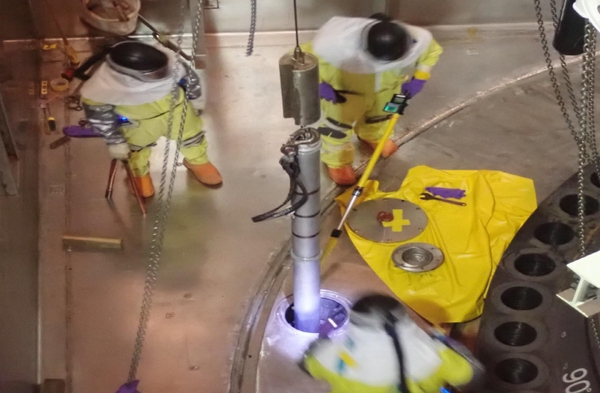 An Excore Detector in Unit 2 is lifted from its housing.

“We need to be focused on capturing events just like this one in our corrective action program, which helps with continuous improvement,” Bilovsky said. “I’m proud of the way the team stopped and assessed the situation before proceeding. That’s exactly what we need to be doing.”

Third-Quarter CEP Meeting
Bilovsky will provide an update on dismantlement activities at SONGS during tomorrow’s Community Engagement Panel meeting, beginning at 5:30 p.m. Details on the meeting are available here.

Other topics include a report on Chairman David Victor’s visit to the Energy Solutions disposal site in Clive, Utah. Much of the low-level waste from the dismantlement of SONGS will be shipped to Clive. Also look for presentations on the recently approved dry fuel storage Inspection and Maintenance Program; important information on liquid batch releases; and the completion of the Wheeler North Reef expansion project.