On Nov. 19, the Los Angeles Times posted an op-ed from MIT historian Dr. Kate Brown comparing the San Onofre nuclear plant to Chernobyl. The LA Times would only allow us a shorter Letter to the Editor in response, so below is our full response which provides additional information and context than the Letter does.

Attempting to construct a narrative that compares accidents at operating nuclear reactors to decommissioning plants like the San Onofre Nuclear Generating Station (SONGS) may grab headlines but is not reality, or science based (“California’s San Onofre nuclear plant is a Chernobyl waiting to happen”). Even the writer of the HBO Chernobyl miniseries responded on Twitter to the op-ed: “…It is not Chernobyl. At all.”

SONGS has safely stored spent fuel on site since 1970, first in wet storage, and in dry storage since 2003. The reactors were shut down in 2012 and retired in 2013. Comparisons to accidents at operating reactors make little sense. Spent fuel simply lacks the heat and the pressure to cause a release beyond the fence line of the plant. The author, Dr. Kate Brown, implies that SONGS spent fuel storage creates a danger to the public, but never says what the risk to the public is. It does not fit her narrative that there is a difference between operating nuclear plants and those in decommissioning. Until June 2015, SONGS maintained a 10-mile emergency planning zone in which protective actions may have included evacuation. However, because only spent fuel remains on site, that’s no longer necessary per the Nuclear Regulatory Commission. 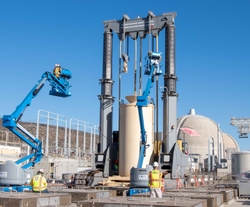 Despite the sensationalized characterizations and factual errors of her piece, Dr. Brown arrives at a conclusion that represents a strong point of consensus between  Southern California Edison, the local communities around the plant, and state government agencies. We all want to move the spent fuel away from San Onofre as soon as possible. This requires action by Congress to authorize a federally licensed facility to accept the nation’s spent nuclear fuel.

Southern California Edison is working to find long-term storage solutions that would see the spent nuclear fuel at SONGS moved off-site as soon as is reasonable. More than 80% of the spent nuclear fuel at SONGS would be eligible for transport by 2021 (and all by 2030)—if there were somewhere to ship it. There isn’t and there won’t be until Congress acts. We can use all the help we can get in advocating for Congress to move forward. Dr. Brown had an opportunity to use her voice and her words to encourage federal action. Instead, she mostly chose to stoke fear and doubt with false comparisons.

At SONGS, spent nuclear fuel in dry storage is safely inside robust stainless steel canisters placed in an air cooled, massive concrete monolithic structure. Regarding “leaks,” the spent fuel inside the canisters is a solid ceramic pellet contained inside a zirconium alloy fuel rod that is welded shut. There is no liquid in the canisters, only inert helium. The seismic rating for the system is twice that of the plant and it is constructed to be submerged under 50 feet of water and still function safely.

Dr. Brown repeats the canard that the canisters cannot be inspected or repaired. Here are the facts: regarding inspections and repairs of spent fuel canisters, SCE is leading the industry, having conducted visual inspections of eight canisters earlier this year, and, in August, conducting a demonstration of canister repair using a metallic overlay. A video of both activities was played at the California Coastal Commission meeting Dr. Brown references. These initiatives will serve the industry, and provide assurance to the public that spent fuel will continue to be safely stored on site until action is taken at the federal level.

If folks such as Kate Brown truly want to find solutions to long-term storage of spent nuclear fuel, we welcome her help. A permanent federal repository has been “waiting to happen” since 1998. That’s where our collective focus should be.