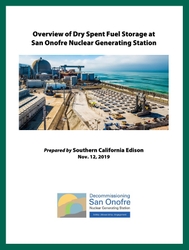 SCE agreed to have further internal dialogue around a host of related topics, including doing a “refresh” of its original analysis of long-term, on-site spent nuclear fuel storage options. This would include an evaluation of meaningful, factual and science-based changes that haven’t already been considered by SCE, and to research commercial changes a task force member reported have occurred with a cask vendor. The resulting paper, "Overview of Dry Spent Fuel Storage at SONGS," provides detailed information on SCE's choice in 2014 of the Holtec UMAX dry spent fuel storage system and why it remains the right choice.

As the paper's Conclusion states:

Given the data collected and the analyses conducted as part of this overview, the choice made in 2014 of a welded-lid, canister-based system, that meets all regulatory and safety requirements, for dry spent fuel storage remains sound. The choice is confirmed by selections of similar systems by utilities across the U.S. and around the world. The call for SCE to change to a completely different dry storage system, with still no substantive documentation to support the position, nearly five years after SCE made its choice, does not meet the high threshold of research or thought required of such a decision.

SCE today provided copies of the paper to staff of Rep. Levin, Rep. Scott Peters and Rep. Harley Rouda, other members of the California congressional delegation, state and local officials, and local stakeholders.

The paper also looks at some of the assertions made by members of Rep. Levin's task force regarding spent nuclear fuel and spent nuclear fuel storage. One of the issues examined at length in the paper is the use of bolted-lid casks, which some have advocated for, rather than the welded-lid canisters used predominantly throughout the U.S. This subject was recently presented at a Community Engagement Panel meeting. A short video clip from the meeting is presented below:

Since SCE re-started fuel transfer operations (FTO) on July 15, 2019, ten canisters have been safely downloaded into the Holtec UMAX system, for a total of 39 canisters. Storage of all 73 canisters of spent nuclear fuel is expected to be completed by mid-2020. Updates on FTO progress have been posted to this website and are available here: