Since 1960, more than 70 test, demonstration and nuclear power reactors have been retired throughout the United States. After SCE formally notified the NRC that operations at San Onofre had permanently ceased, SCE then notified the NRC on July 23, 2013 that it had transferred fuel from the Unit 2 reactor to the spent fuel pool. The company had previously defueled Unit 3. Once fuel was removed from both reactors, San Onofre transitioned from an operating to a "possession" license. 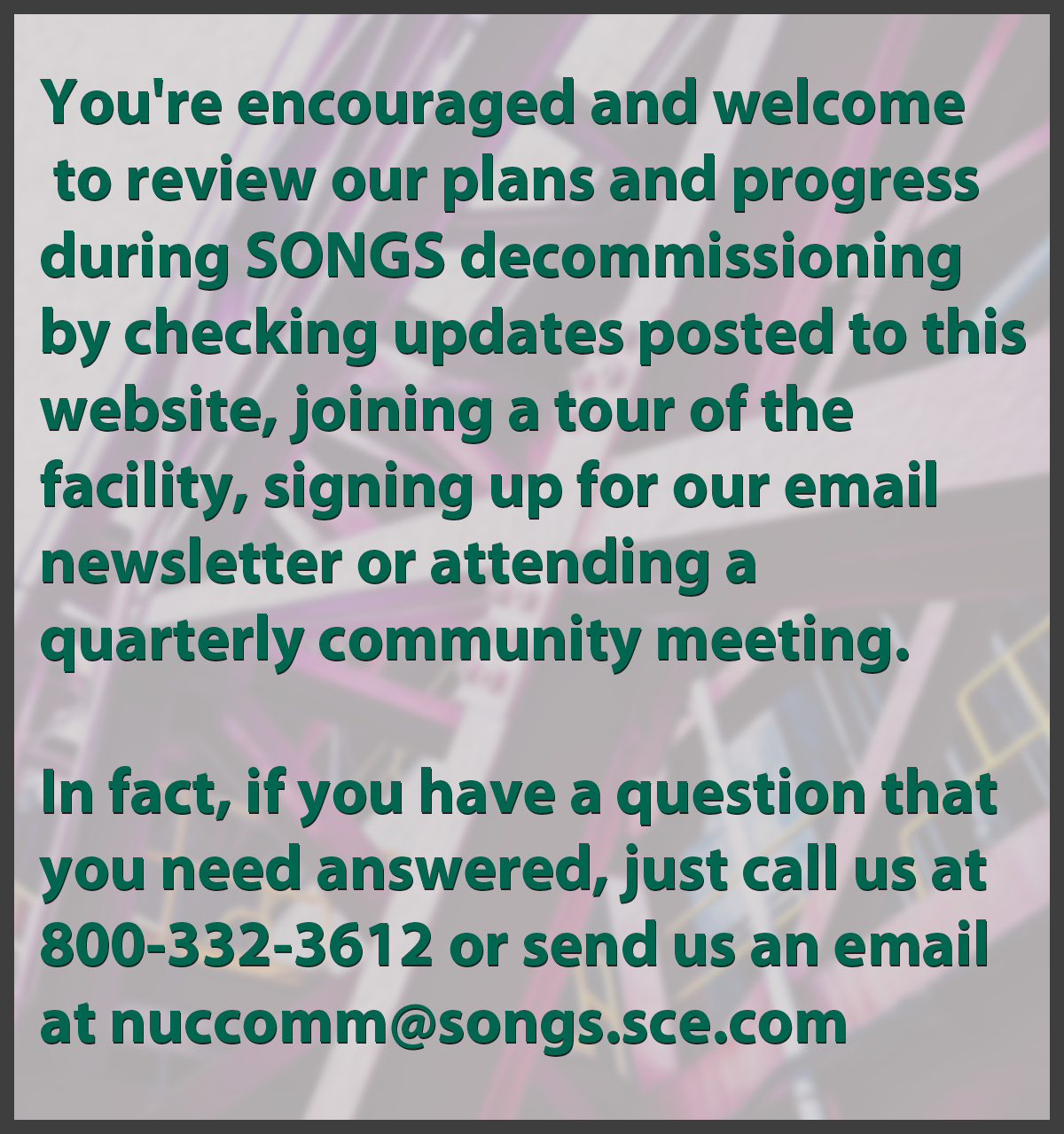 NRC regulations allow up to 60 years to complete decommissioning. However, SCE believes completing the work in a timely manner benefits our customers, the local communities, and the environment. We expect the process to take up to 10 years.

Importantly, decommissioning removes radiological material from the site and eliminates potential industrial hazards, which is better for the surrounding environment. Additionally, removing the buildings, containment domes and other above-grade structures brings us one step closer to restoring the site and starts the process to return the property to the U.S. Navy as soon as practical.

Within two years of shutdown, SCE submitted to the NRC and state officials a detailed plan spelling out specific decommissioning activities and schedules, cost estimates and potential environmental impacts. Public review and comment was an important part of this process, and NRC oversight of decommissioning continues.

The SONGS decommissioning project underwent rigorous environmental review and permitting, resulting in a March 2019, decision of the California State Lands Commission, as well as a Coastal Development Permit granted in October 2019, for the onshore work activities by the California Coastal Commission.

Since June 7, 2013, there have been significant steps along this journey to decommission SONGS.

We've captured those milestones in our decommissioning timeline.

Nuclear power plants are required by the NRC to put aside funds for decommissioning while the plant is operating.

Funding for SONGS decommissioning comes from an independent nuclear trust fund which was collected from customers over the years and is fully funded. Any unused money will be returned to customers. Oversight of the trust fund expenditures is provided by the California Public Utilities Commission. Customers contributed approximately one-third of the trust funds while two-thirds of the total is due to prudent investments by SCE.