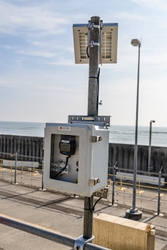 In addition to the ongoing, 24/7 radiation monitoring within and along the perimeters of the plant, SCE installed a separate system specifically for the dry spent fuel storage facility. Though the system is not required by the NRC, we’ve worked with our community and agency partners to install this system to enable public agencies to monitor radiation dose readings, providing additional information to the public. Only one other nuclear plant site in the U.S. has such a program.

We are working with independent partners who are assisting with the program including the California Department of Public Health Radiologic Health Branch, California State Parks and the city of San Juan Capistrano.

The on-site monitors feed radiation readings from three locations on the storage pad (and a fourth "control" site) to the partners, and the state Radiologic Health Branch produces a monthly report for the public, which is linked above.

The report includes the high, low and average radiation readings from these locations, and provide context so that the public can understand what the levels are and how they translate into the everyday world.

Watch the video below to learn more about the continuous radiation monitoring system at San Onofre.

How We Receive Our Annual Radiation Dose

All of us are exposed to radiation every day, from natural sources such as minerals in the ground, and man-made sources such as medical x-rays. According to the National Council on Radiation Protection and Measurements (NCRP), the average annual radiation dose per person in the U.S. is 620 millirem, or 620,000 microrem.

Most of our average annual dose comes from natural background radiation sources:

Another 48 percent of the average American’s dose comes from medical procedures. This total does not include the dose from radiation therapy used in the treatment of cancer, which is typically many times larger.