Nuclear power plants throughout the United States have been safely storing spent nuclear fuel in steel-lined concrete pools throughout the industry's history, and in 1986 began expanding capacity by adopting dry storage technology.

How does it work?

This proven technology involves sealing spent nuclear fuel in airtight, welded steel canisters that provide both structural strength and shielding, and then housing them in reinforced concrete structures. Dry fuel storage involves a passive cooling system with no moving parts. Inside the canisters is helium, an inert gas that helps with the cooling process. Heat from the fuel is dissipated by air entering vents in the storage structure and circulating around the outside of the steel canister.

Watch the video below for an overview of the Holtec spent fuel storage system at San Onofre.

Dry fuel storage is extremely safe. The systems are designed to withstand various natural phenomena such as earthquakes, tsunamis, projectiles from a tornado, and manmade events such as aircraft crashes and sabotage.

In the U.S., there are more than 3,000 canisters stored, representing nearly 35 years of spent fuel storage. There has never been an incident where the health or safety of an employee or member of the public has been affected by commercial spent nuclear fuel in dry storage 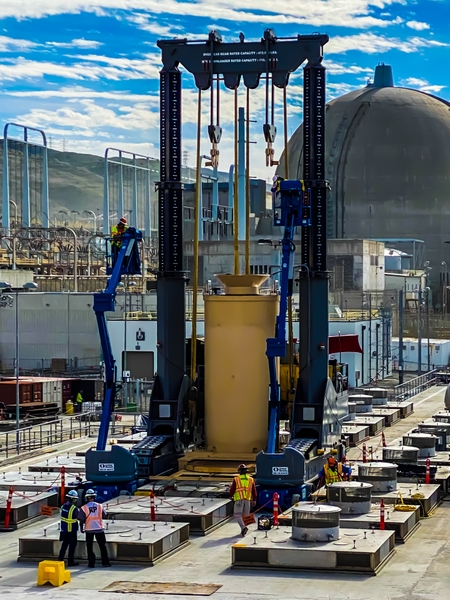 Thirty-four states have at least one dry cask storage facility; these are formally known as Independent Spent Fuel Storage Installations, or ISFSIs. Eleven states currently have shutdown reactors without an operating reactor, including three in California. San Onofre, one of those three sites, has safely stored used nuclear fuel for more than five decades and began utilizing dry cask storage in 2003.

The vast majority of dry storage canisters used at ISFSIs in the U.S. are welded-lid, multi-purpose canisters (MPCs) similar to those used at SONGS; that is, most use either canister technology manufactured by Transnuclear (TN) or Holtec. Multi-purpose means storage and transportation.

The Department of Energy guided the industry toward MPC systems to standardize use of this effective technology. As the Electric Power Research Institute (EPRI) has noted "[t]he cornerstone of the MPC system design is that it alleviates the need to re-handle the fuel beyond the initial canister loading in the reactor's spent fuel pool."

During its history of operation, SONGS provided a significant amount of reliable, carbon-free electricity to customers throughout Southern California. The legacy of that environmental benefit is spent nuclear fuel, itself having no environmental impacts as long as it is safely stored both in the short and long term.

Read our FAQ about Dry Cask Storage at SONGS here.