SCE, in alignment with stakeholders and the local community, is interested in seeing the spent nuclear fuel safely stored at SONGS moved to an off-site, licensed location. The Community Engagement Panel has spent considerable time and effort exploring these potential opportunities, and the issues involved, at multiple meetings, including one focused on consolidated interim storage.

SCE also has engaged a team of experts – the “Experts Team” – to advise SCE on any proposed relocation of SONGS used fuel. SCE retained North Wind, Inc. to support the development of a strategic plan to assess the feasibility of relocating the used nuclear fuel. The Experts Team will review, advise upon, and support SCE’s development of the strategic plan.

How We Got Here

In 1987, Congress amended the Nuclear Waste Policy Act of 1982 to establish Yucca Mountain in Nevada as the nation's geologic repository for high-level nuclear waste. In 2008, the Department of Energy submitted a license application to the U.S. Nuclear Regulatory Commission (NRC) to begin construction of the facility on federally owned desert land about 100 miles northwest of Las Vegas. Progress on the proposed storage facility has been stalled by opposition. 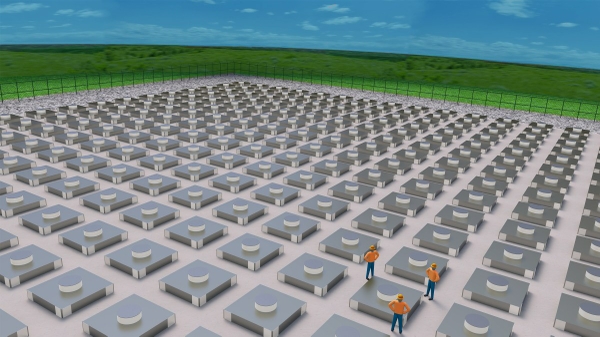 Rendering of the Holtec CIS facility proposed for New Mexico.

One of the Blue Ribbon Commission’s recommendations was consent-based Consolidated Interim Storage (CIS) as part of an integrated waste management plan.

Two proposed CIS sites in the southwest are currently in licensing review with the NRC: the Holtec Eddy-Lea Energy Alliance facility in Carlsbad, New Mexico which already is home to a deep geologic depository called the Waste Isolation Pilot Plant, and the Interim Storage Partners (a joint venture between Waste Control Specialists and Orano USA) facility in Andrews, Texas.