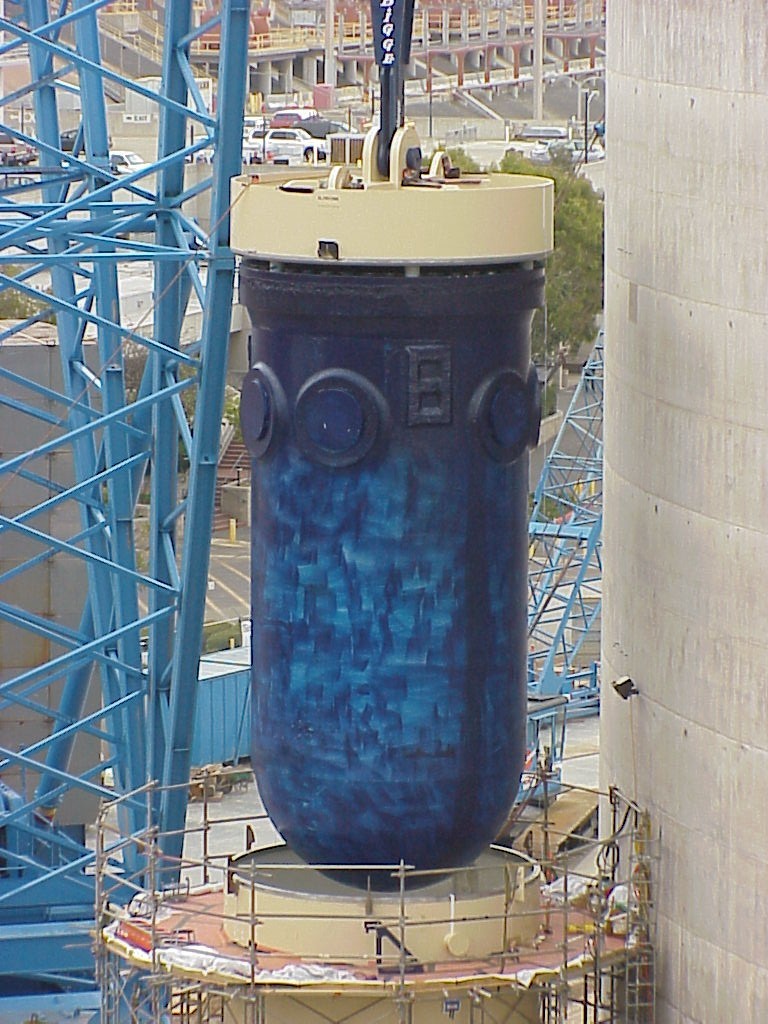 In October 2002, the Unit 1 RPV is lowered into its storage container during the decommissioning of SONGS Unit 1.

Unit 1 at SONGS operated from 1968 to 1992, when it was retired and partially decommissioned. The above grade material from the Unit 1 site, the concrete and steel of the plant, was safely dismantled and shipped off-site, much like what will happen with Units 2 and 3 in the coming years. What has remained at SONGS is Unit 1's reactor pressure vessel, the component that held the nuclear fuel when the plant was operating.

During Unit 1 dismantlement, the RPV's metal shell was placed inside a huge steel cylinder. The cylinder was filled with grout for shielding against radiation, sealed, and had been stored safely at SONGS ever since. There is no liquid inside the container.

Southern California Edison, with our decommissioning contractor, SONGS Decommissioning Solutions (SDS), prepared the SONGS Unit 1 reactor pressure vessel for shipping to a licensed disposal facility in Utah. The shipment met all federal and state safety and regulatory requirements for transportation.

One of the first major projects undertaken for the dismantlement of Units 2 and 3 was upgrading the rail line that leads off-site to accommodate heavy loads, such as the 770 tons of the Unit 1 RPV package. The rail spur will see plenty of use over the next eight years, as most of the material leaving SONGS will depart via rail.

To support the Unit 1 RPV project, we developed a traffic plan with local stakeholders to safely re-direct local beach area traffic near SONGS.

SCE and SDS developed detailed plans to safely execute the shipment of the Unit 1 RPV package to the Energy Solutions facility in Clive, Utah. On the night of May 24, 2020, the shipment left by rail, traveling from San Onofre to Apex, Nevada, using a thirty-six axle Schnabel rail car, the largest in the world, with a capacity to transport loads up to 880 tons. Rail transport took four days covering 366 miles with a maximum speed of 15 mph. Extensive rail planning included machining the carbon steel sides of the shipping container to comply with extremely tight railroad bridge clearances, multiple 3D laser surveys of the rail route and third party structural evaluations of dozens of railroad bridges and structures.

Once the RPV arrived in Nevada crews prepared the shipment to be transferred to a hydraulic platform trailer with 384 trailer tires for road transport. The road conveyance consisted of six large trucks that pushed and pulled the RPV trailer 400 miles through Nevada and into Utah with a maximum speed of 10 mph over a 10 day period.

On July 14, 2020, the shipment arrived in Clive. "The removal of the Unit 1 reactor pressure vessel from the SONGS site is an important milestone in our decommissioning work," said Doug Bauder, SCE vice president and chirf nuclear officer. "The project required detailed planning and coordination between the SONGS oversight team and our contractors. From start to finish, the project was done with safety as the top priority."

More than 20 companies were involved in the scoping, planning and execution of this project.

Watch the video below to see safety in action during this incredible journey. 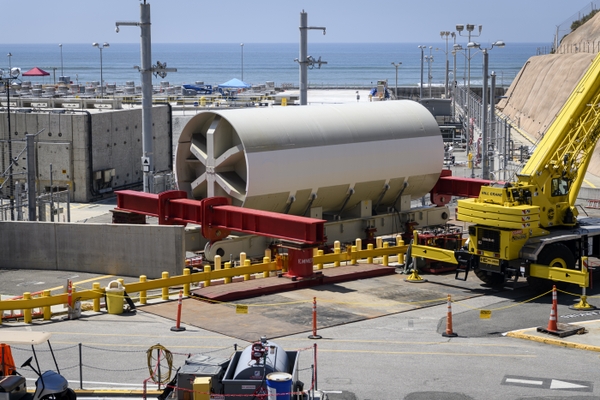 The Unit 1 reactor pressure vessel package is prepared for shipment.

The shipment was considered low-level (or Class A) waste, the least hazardous of the radioactive waste classifications as defined by the NRC. Low-level waste often includes contaminated cleaning supplies, used disposable protective clothing, reactor parts and a variety of other similar wastes.

The contact dose rate for the package is less than 0.1 millirem an hour, which is 500 times below the Department of Transportation limit for these types of shipments. A chest X-ray provides a dose of 10 millirem, for comparison. 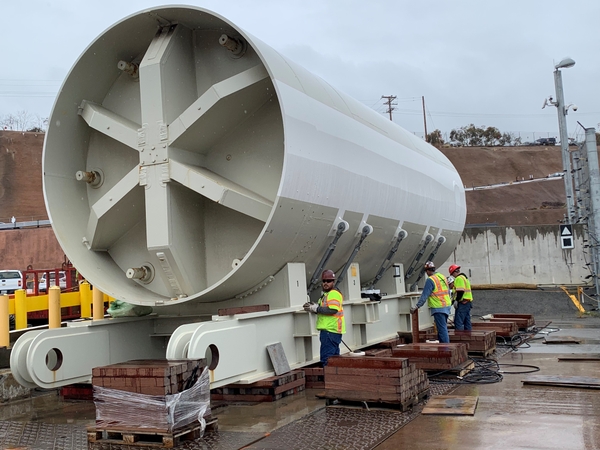 The most recent heavy load to be safely moved to Clive, Utah from SONGS was the last of four retired steam generators in 2012.

SCE and SDS performed this work with the SONGS pandemic protocol in place to protect the health and safety of workers.

By the Numbers: Unit 1 RPV

Length: The RPV package is 38.5 feet long and 15.5 feet in diameter. The shipping skid adds an additional 7 tons to the overall weight and the skid is 47.5 feet. On the skid, the entire skid and RPV is 19.5 feet tall. (Lengths are rounded).