Since the Aug. 3, 2018, canister downloading incident, there has been attention placed on the incidental contact that the Holtec MPC-37 canisters make with the cavity enclosure container (CEC) components as they are lowered. The Nuclear Regulatory Commission addressed this contact in the Frequently Asked Questions document released prior to its Nov. 8, 2018 webinar:

In addition, the NRC suspects that all canisters in the storage vaults may have had metal to metal contact because of the design of the vertical ventilated module (VVM) divider shell between the respective canister and storage vault. The clearance space between the canister and the divider shell is quite small, so canisters tend to bump against the shell while being loaded into the vault. A future inspection item will involve an aging management evaluation of all other canisters given the high likelihood of metal to metal contact.

Southern California Edison, based on detailed engineering analyses, determined the incidental contact that may occur is minor, does not degrade the safety capability of the canisters, and is rightly a future area of inspection during an aging management program, which typically begins 20 years after initial storage. But it should be noted that SCE will submit a canister inspection and maintenance plan to the California Coastal Commission in late-2020.

The NRC affirmed during its March 25 webinar that any contact experienced by the canisters is minimal and does not affect safety. 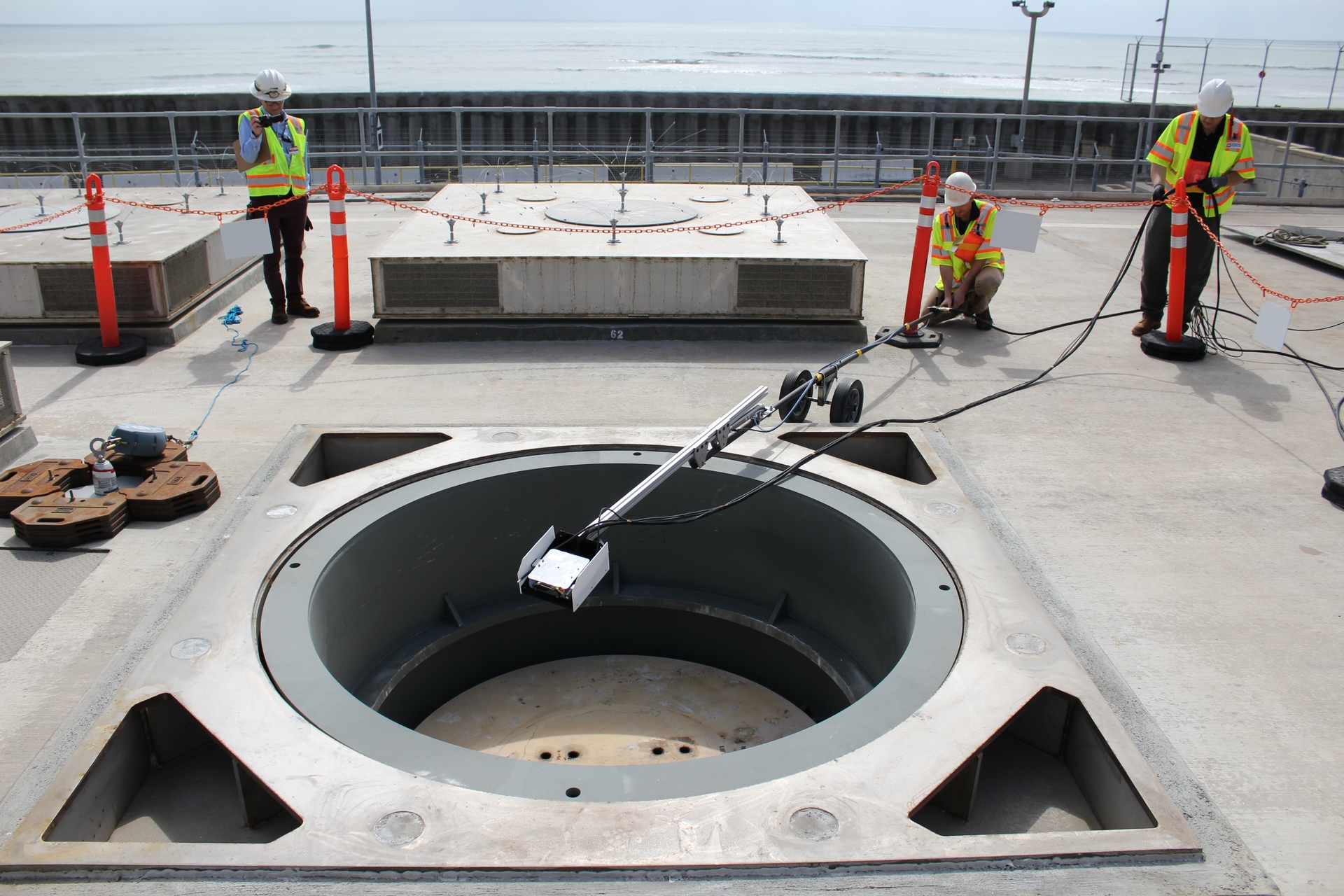 The robot is placed into the cavity enclosure container to begin the visual inspection of a loaded multipurpose canister.

The inspections were informed by previous inspections carried out under the auspices of the Electric Power Research Institute (EPRI) through a program called the Extended Storage Collaboration Program (ESCP). Program participants include utilities, universities, and national laboratories, as well as industry representatives. Roughly 600 people in 21 countries have been involved in the effort to gain a better understanding of the long-term storage of spent nuclear fuel. The EPRI manager in charge of ESCP was present during the SONGS inspection, providing valuable technical support. Read more about the program here. 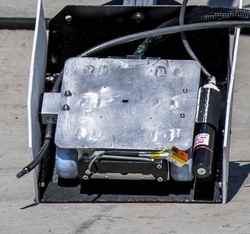 The robot is equipped with a GE borescope that is capable of picking up minute details on the canister surface.

For the inspections at SONGS, a robot with a radiation-tolerant aluminum body was deployed inside the cavity enclosure container. The robot is the same one used for multiple previous canister inspections at other facilities, developed and operated by Robotic Technologies of Tennessee (RTT). It’s equipped with three cameras, including a General Electric borescope that is capable of picking up minute details on the canister surface. The robot also takes temperature and radiation dose readings. GE Inspection Technologies’ VideoProbe, with Real3D™ point cloud surface scanning and analysis, is used widely for aviation, military, and oil & gas applications. On a daily basis, there are hundreds of technicians globally using the technology to ensure airplanes are safe to fly, and turbines are safe to operate. Specialists from GE assisted with the SONGS inspection.

Preliminary inspection results confirmed the contact does not affect the safety function of the canisters. Inspection data will be provided to Nuclear Regulatory Commission for analysis. During the March 25 NRC webinar, the commission stated all the spent fuel canisters at SONGS are in safe condition and performing their required safety function.

SCE will safely store the spent nuclear fuel at San Onofre until there is an off-site storage solution. We continue to advocate and build support with others for such options as consolidated interim storage or a permanent geologic repository like Yucca Mountain.

Downloading the used fuel into canisters is an important step to getting the fuel eventually shipped off site. By the end of 2020, three-quarters of SONGS spent nuclear fuel will be ready for pick-up by the Department of Energy.