The subject of seismic safety at San Onofre Nuclear Generating Station (SONGS) has been mentioned quite a bit lately in the media. Various recent news reports have made reference to “eight million people living within 50 miles of SONGS,” which may be true, and “it sits on two active earthquake faults,” which is false. The story that doesn’t get told is what Southern California Edison has done, and is doing, to mitigate the risk of seismic hazards to keep our local communities safe. Equally important is an understanding of spent nuclear fuel when talking about its potential impact on the health and safety of the public.

A baseline for understanding the seismic risk at a decommissioning nuclear energy facility is to know the differences between an operating nuclear reactor and the storage of spent nuclear fuel. Operating reactor cores exist in environments of tremendous heat (300+ degrees Celsius) and pressure, as much as 2,200 PSIG, and can produce 3.5 million kilowatts of thermal energy. Spent nuclear fuel many years removed from a reactor core, such as the spent nuclear fuel at SONGS, has neither the heat nor the pressure of a working reactor. For instance, a typical SONGS MPC-37 spent fuel canister emits 27kW of heat and maintains about 44 psig. Huge differences that speak directly to what types of events are possible involving spent nuclear fuel.

The spent nuclear fuel at SONGS is placed in thick, 5/8” stainless steel canisters that are welded shut. The canister is placed in a 3/4” stainless steel cavity enclosure container (CEC) with a welded bottom. The CEC is supported by a thick reinforced concrete foundation pad and completely surrounded by concrete that forms a massive protective monolith. Each storage module is capped by a lid weighing 35,000 pounds. SONGS also has older spent nuclear fuel located in an AREVA NUHOMS system with equally robust safeguards.

Inside the canisters, radioactive material is contained in solid ceramic pellets that are sealed within fuel rods, which are organized into fuel assemblies. The system provides radiation shielding, physical protection and passive cooling. The canisters have no moving parts and contain no water or air, only helium to aid in cooling. 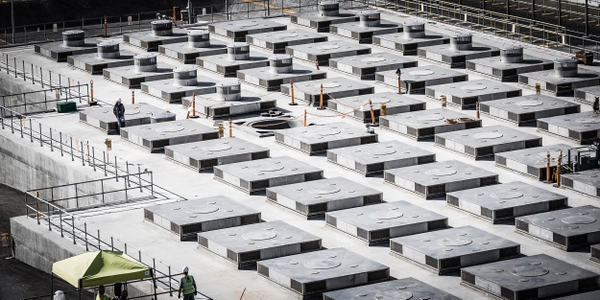 When assessing the seismic safety at nuclear facilities, "peak ground acceleration" at the facility's location is a more meaningful way to measure an earthquake's potential impact, especially when the epicenter is miles away. As approved by the U.S. Nuclear Regulatory Commission, Units 2 and 3 at SONGS (including the spent fuel pools) were built to withstand a peak ground acceleration of 0.67g (g refers to the force of gravity). The dry spent fuel storage systems were constructed to withstand 1.5g, more than double the design of the nuclear plants. For comparison, current California Building Codes require buildings in the vicinity of SONGS to be designed to withstand a peak ground acceleration of 0.38g.

We are all more familiar with the Richter scale when talking about seismic issues, so what does a “g” value tell us about potential earthquakes in the area of SONGS? Dr. William Parker, a former member of the SONGS Community Engagement Panel and current professor emeritus in the Department of Physics and Astronomy at the University of California, Irvine, addressed this question for the CEP in 2014. Here is how he described it:

The Richter (seismic) scale is a measure of the total energy released during an earthquake. But it is ground motion that determines how a structure will respond in an earthquake. The ground motion at any specific location depends on the distance from the epicenter of the earthquake and on the geological and topographical characteristics of the local and intervening rock. A reasonable measure of the ground motion is “peak acceleration” or “g” and is typically used as criteria in the design of structures. Ground acceleration is typically measured as a percent of the acceleration of a free falling object due to gravity (g = 9.8 m/s²). Thus an acceleration of 4.9 m/s² would be written as 0.5g.

Recent research by Dr. Neal Driscoll at the Scripps Institution of Oceanography indicates regional faults could produce no greater than a magnitude 7.3 to 7.4 earthquake in the vicinity of SONGS, which is slightly less than previously analyzed. But remember, both the Holtec and AREVA/NUHOMS systems were designed and constructed to a higher seismic potential.

Previous seismic studies hypothesized that a blind thrust fault, called the Oceanside BT, was located directly below the SONGS site. However, according to the peer-reviewed research completed by Dr. Driscoll in 2017, the OBT does not exist. That means the nearest active fault to SONGS is the Newport-Inglewood/Rose Canyon fault with a closest point of approach located about five miles offshore. After that, the next closet active fault is 20 miles away, the Palos Verde/Coronado Bank Fault.

The U.S. Geological Survey has an interactive map available online to see which faults are closest to SONGS. The link is here and a screenshot below. 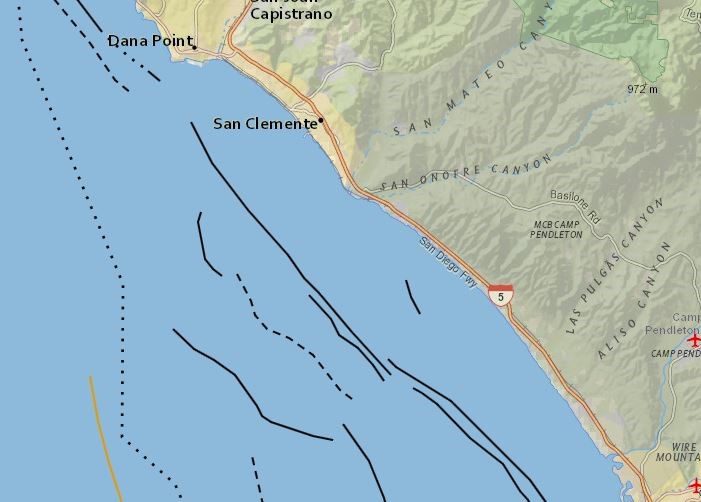 Clearly, SONGS does not reside on “two active faults.” The Cristianitos Fault is about 1/2 mile south of the plant but was determined to be inactive and hasn’t seen any movement for 125,000 years.

If an Earthquake, What Next?

So what would happen to spent nuclear fuel stored at SONGS in the event of an earthquake? One activist group speculated the 50-ton canisters “could be violently thrown and broken open…”

The Holtec UMAX and AREVA systems are designed with very tight tolerances that prevent the canisters from moving much inside their cavity enclosure containers, approximately 1/4 inch in a lateral direction. Likewise, the fuel assemblies inside the canisters are secured and can’t move very much. The Holtec Final Safety Analysis Report, approved by the Nuclear Regulatory Commission, explains:

“The HI-STORM UMAX will withstand all normal, off-normal, and postulated accident conditions without release of radioactive material or excessive radiation exposure to workers or members of the public. Special considerations in the design have been made to ensure long-term integrity and confinement of the stored SNF throughout all cask normal and off-normal operating conditions…” Holtec FSAR, (Section 2.7.1 General)

Because the fuel is “spent," and has undergone years of radioactive decay, there is no credible potential for criticality or radiological release. The Nuclear Regulatory Commission has reaffirmed this fact many times. As a decommissioned plant, the NRC and FEMA eliminated the 10-mile emergency planning zone that operating nuclear plants maintain. That was four years ago. There’s no longer a need to store, distribute or use potassium iodide (KI) tablets because all the Iodine-131 was long ago decayed.

Things have changed. In other words, everyone is safer.

Listen to Scott Morris, Region IV administrator with the NRC, talk about the reduced risk at SONGS since the reactors were retired in 2013.

Southern California Edison will continue to store our spent nuclear fuel safely and securely as we’ve done for nearly 50 years.

“Over a period spanning more than three decades, industry has safely loaded and placed into storage over (3,000) of these containers. Industry is applying this considerable experience in the implementation of aging management programs that will continue to assure the long-term safety of this form of storage.”